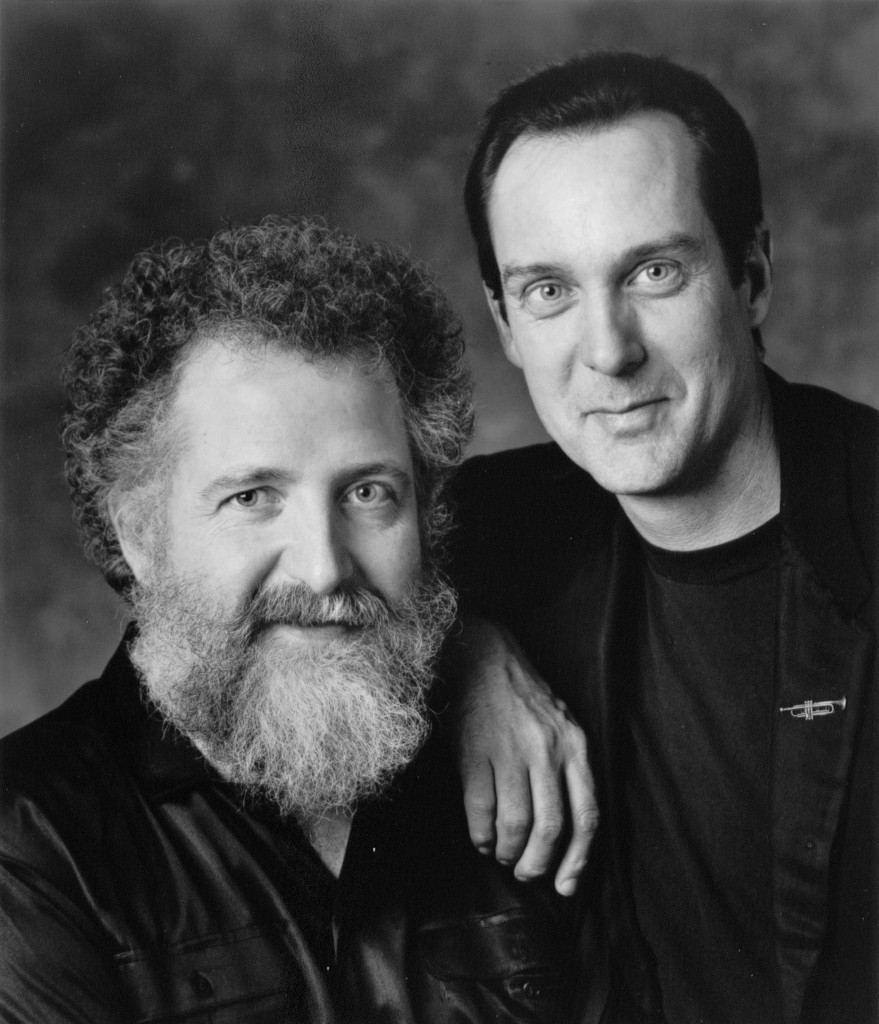 Chris and Ken Whiteley are two incredibly talented musicians who have appeared on over a hundred and fifty recordings between them, deservedly winning the respect of critics, the admiration of their peers and the love of their fans. www.chriswhiteley.com | www.kenwhiteley.com

Chris and Ken Whiteley are two incredibly talented musicians who have appeared on over a hundred and fifty recordings between them. In a career that spans over thirty years, performances across North America and five Juno nominations, they deservedly won the respect of critics, the admiration of their peers and the love of their fans.

Born in the United States and growing up in Toronto, Chris and Ken absorbed and mastered an astonishing range of musical skills. they became professional musicians as teenagers with a group called the Original Sloth Band, with whom they recorded three albums and appeared on Saturday Night Live, backing Leon Redbone. The Whiteley’s folk festival debut was as “new songwriters” at Mariposa ‘69 and for a number of years they carried on multiple musical personalities, playing blues, swing and a multiplicity of roots styles with the “Sloths,” while developing as songwriters and honing their studio skills accompanying other artists. In the eighties, still playing blues and jazz, Chris and Ken also explored separate musical avenues. Chris wrote and performed country music with his wife, Caitlin Hanford and Ken lead and exciting six-piece R&B band, the Paradise Revue. As the nineties approached they began to once again “play the blues” together, re-entering an idiom that was as comfortable for them as a well-worn guitar neck.

In 1993 they released the album Bluesology, a musical journey in time in space through the blues. Winner of the Jazz report “Blues Album of the Year award” and a Juno nominee, it paid tribute to a wide range of blues influences. Since the release of that album, they have been featured at such folk festivals as Winnipeg, Vancouver and Owen Sound and were the first Canadian group to be invited to the prestigious Chicago Blues Festival. They followed this success with the Juno-nominated Sixteen Shades of Blue, an album of all-original blues that showcased their versatility and understanding of the blues.

Ken continues to be in great demand as a producer for other artists, as a solo artist, and as part of the trio Scarlett, Washington, and Whiteley with “old friends” Mose Scarlett and Jackie Washington. Chris has also been active as a solo artist, releasing two albums of original swing and blues music titled, Second Look and Blues Party. Chris and Ken have continued to hone their songwriting skills, and have had their songs covered by such diverse artists as Praise Oyster, Chad Mitchell, Penny Lang, Cindy Church and the hot R&B band fathead among others. Their latest album, Taking Our Time, represents another dramatic step forward in distinguished musical careers that are on the brink of a new level of success.

Taking Our Time
“It is not unusual for Ken and Chris Whiteley to appear in this column, together or singly – in fact it’s difficult to come up with a name in the music business who has not involved one or the other of them in some capacity. But this is the first time these two multi-talented multi-instrumentalists have decided to do it all themselves, no rhythm section, no backup singers, nada. The most important thing they’ve done here though, together and separately, is come up with some fine songs. “Looking For The Blues”, “I’ll Be Looking For You” and “Stranger In Your Home” are among the very best new songs I’ve heard anywhere. There are also some truly fine musical touches: the Lonnie Johnson sound to “Homeless Man”, the decision to use a unison trumpet/slide guitar on the melody of “I’ll Be Looking For You” with a jug bass line, the John Lee Hooker-ish “Shufflin’ and Shaggin'” and the stringband sound of “Saskatchewan Blues”. To keep things from getting too serious, “I Don’t Mind” is a plea for a share of a partner’s lottery winnings that will keep a smile on your face for its 3:55. “Hold It”, “Perfume And Tobacco”, “On This Journey” and “Take Your Time” are perhaps less of blues interest but are excellent songs nonetheless. Most every instrument we’ve seen them play shows up at one point or another and always appropriately.”
John’s Blues Picks, MapleBlues
October 2001

Sixteen Shades Of Blue
The Whiteley Brothers Ken and Chris – have been major players on the Canadian folk and blues scenes for close to three decades now. On their latest collaboration, they’re presenting all-original material in 16 different styles of the blues, ranging from the rural to the urban and from the classic to the contemporary. Although they’re really very good throughout, the Whiteleys are at their best on up-tempo numbers like the ragtime “Mr. Weatherman,” the jump-style “Swinging The Blues,” the happy-sounding “We Just Smile,” the jazzy “I Depend On You” and the jug band arrangement of “Doing Something Right.” (MR)
Sing Out!, Winter 1997

Though Chris and Ken Whiteley have appeared on more than 150 recordings between them, this is their first solo release. They play 16 original blues tunes (one co-written with Sylvia Tyson) which touch just about all the blues bases from ragtime to gospel influenced rhythms to jug band. The brothers have a distinct style and they are in command of what they do. If you are looking for good original blues stories, this is the place. Sixteen Shades of Blue is one of the first releases from the newly formed Borealis Recording Company (Ken Whiteley is a founder), and it is an impressive debut, to be followed by discs from Eileen McGann and J.P. Cormier. (KD)
Dirty Linen, Apr/May 1997

Chris and Ken Whiteley have a pleasant surprise here. Although they have appeared on more than 150 recordings between them, this is the first album of all original material. Doing the blues, their way since the sixties has given them a natural, sometimes intense, most times laid back feel for this music genre. Taking turns on lead vocals and displaying their talents on more than 20 instruments, including acoustic and electric guitar, piano, trumpet, mandolin, harmonica, accordion and, yes, washboard and rubberboard, the Whiteleys serve up a package of delectable blues, so grained with soul that it might even surprise their many fans, particularly with the jug band treatment of Must Be Doing Something Right, the off-the wall ragtiming of Mr Weatherman, where they get an assist from John Deehan on clarinet, Jerry Fuller on snare and high-hat and Victor Batemen on string bass, and Gulf of Tears, described as a “mid-temp shuffle with gospel-style vocals. Those vocals are laid on beautifully by David Wall and John Mays. Much too much to pick from here. Friday Night Blues is exceptional with Ken on tenor banjo and vocals, Chris on guitar and trumpet, keyboardist John Sheard, Dennis Pendrith on tuba, drummer Al Cross, trombonist Laurie Bower and John Deehan on clarinet, an exhausting piece of work, as is the Louis Prima style jump blues of Swinging The Blues. Another treasure is Now Tell Me That You’ve Got The Blues, which Chris wrote with Sylvia Tyson. Great hornwork by Laurie Bower on trombone, John Deehan on tenor sax and Chris on trumpet. Classis stuff. Instore play will attract. Available through Borealis at 416-530-4288. (WG)
RPM – Monday December 9, 1996

Ken and Chris Whiteley are living proof that you don’t have to live the blues to either sing or enjoy the blues.

The Toronto-based musicians have been playing vintage American music for more than 25 years, both as solo performers and together. In 1992 they released Bluesology a critically acclaimed survey of classic blues tunes.

The distinguishing characteristic of Sixteen Shades of Blue, the Whiteleys’ first Borealis release, is that all 16 tracks are original. Anyone who has listened to Chris’ Second Look or Ken’s Acoustic Eclectic albums already know they can write as well as play and produce.

Sixteen Shades of Blue give’s us more good songs, augmented by some of Toronto’s best musicians including bassists Denis Pendrith and Victor Bateman, drummer Al Cross and pianist John Sheard among others – not forgetting Chris’s guitar-wielding son Daniel. As usual, Ken and Chris pitch in with their own dozen or so instruments.
Robert Reid
The Record, Kitchener, Thursday, April 24, 1997 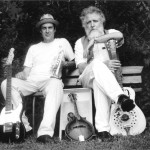 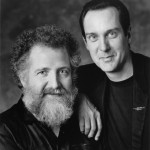